The core of the PDC keynote has been about Windows Azure, the newly announced "Cloud OS" that Microsoft is showing off. Although this is neat and all, I tend to think of myself as a "data guy" so I've just been nodding and smiling.

Until a few minutes ago, when Bob Muglia presented this slide: 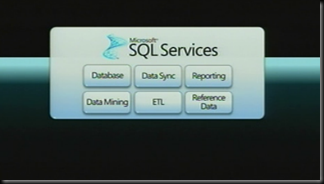 You're probably aware already of SQL Server Data Services. This is a new announcement about the evolution of SSDS, named simply SQL Services. This is a cloud-based service that includes core RDBMS functionality but also analysis, data mining, reporting and ETL. Now that made me sit up and pay attention. (And start typing ;-)

One thing that caught my ear, however, is that while SQL Server Analysis Services and SQL Server Reporting Services were both mentioned by name, SQL Server Integration Services was not. Instead Bob Muglia simply talked about ETL, not SSIS.

What does this mean? Who knows. I could just be focusing on a trivial oversight (I often forget to mention things when I'm on stage, so I know how this works) but I think it will be interesting to see how this plays out. Stay tuned!

Posted by Matthew Roche at 9:45 AM