I've finally found the time to install SQL Server 2008 RC0 (although my SSIS/BIDS install is corrupted so I have not been able to run SSIS in RC0 through its paces) and noticed something interesting. I was creating a new C# project and noticed this: 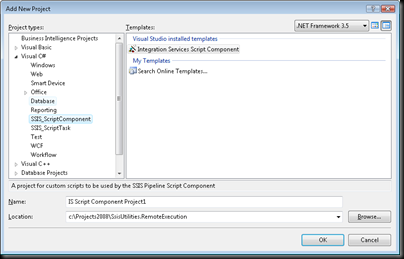 Do you notice the two new project templates in the tree view on the left? That's right - Microsoft has added new class library (DLL) templates for creating custom Control Flow tasks and Data Flow components in C# and VB.NET. It's pretty unlikely that SSIS component development will ever approach the ease of use of the Script Task and Script Component, but having a Visual Studio project template that sets up much of the component plumbing is a nice step forward.

UPDATE: Upon further reflection (and a very helpful email) it turns out that these project templates are not designed for SSIS component developers. They are instead (as the project names should have clued me in, were I not so excited over my discovery) the templates that are used by Visual Studio Tools for Applications (VSTA) in the Script Task and Script Component inside a package. When you add a new Script Task or Script Component to your package, VSTA creates a new instance of one of these templates.

Posted by Matthew Roche at 7:10 AM

woah. excellent stuff. Should be a big help.

As soon as I saw a comment on this I expected it to be one of those "You didn't know about this?" questions I've been getting lately. ;-)

These are actually the project templates for the Script Task and Script Component used by VSTA.

Sorry to get hopes up!

But you know, it wouldn't be such a hard thing for an industrious MVP to put together ...

You're probably right, but I don't know any of those...