Douglas Laudenschlager from the SSIS documentation team has posted an excellent article to his unofficial SSIS blog on how package configurations are applied in SQL Server 2005 and SQL Server 2008 Integration services. Check it out here.

I don’t often post on my blog simply to reference someone else’s original work, but I wanted to do it today because:

Posted by Matthew Roche at 9:20 AM No comments:

My friend and colleague Lynn Langit has a habit of blogging where she posts an image and a brief question and that’s it. I’m very jealous, because I can’t seem to write a blog post that’s shorter than 20 pages or so.

This is how I configure my Visual Studio development environment for SSIS development: 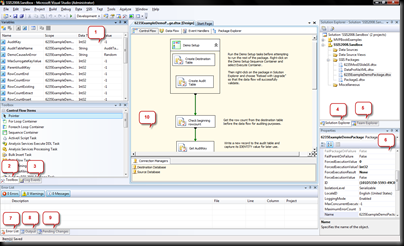 How do you configure your windows?

Ok, so now if I were More Like Lynn, that would be the whole post. But since I haven’t had a mango martini in far too long, I feel compelled to elaborate:

This layout gives me ready access to all of the tools I need, when I need them. And I would still love to know how you lay out your windows in your SSIS development environment…

SSIS and the Package ProtectionLevel Property

This is another one of those “I could have sworn I blogged on this years ago” posts.[1] I was looking for something I’d already written that discussed the ProtectionLevel property of the SSIS Package, but search as I might I could not find it. So I guess it’s time to write it, eh?

(As a note for the lazy reader, the moral of the story is that you should use the DontSaveSensitive ProtectionLevel for your packages, and use package configurations to apply the sensitive property values to your packages. Feel free to read the next five pages, but it all boils down to this.)

First of all, let’s start off by reviewing the property itself. Take a look at the properties of any SSIS package and you’ll see it there: 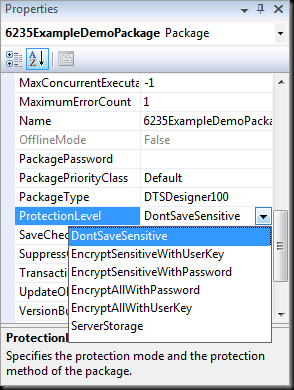 Notice the description there at the bottom of the Properties window? “Specifies the protection mode and the protection method of the package.” Hey – that’s pretty self-explanatory, so maybe we don’t need a blog post after all. Right?

Before we continue, why not take a look at what SQL Server Books Online (BOL) has to say about this property?

Why does this matter?

Well, SSIS is designed to be secure. One aspect of this is that any “sensitive” information that is part of your package (think about it – many packages include information like passwords in connection strings for connecting to databases and legacy systems where valuable data is stored) needs to be protected. And by protected, we mean never, ever stored in clear text.

But wait, you say – I’ve built many SSIS packages and I’ve never been prompted to encrypt any sensitive anything. How am I supposed to believe you?

Good question. Like most developers[4], the fine members of the SSIS product group wanted to avoid irritating their users.[5] Because of this, they wanted to make protecting sensitive data seamless, even transparent. So they did. Take another look at that screen shot of the Properties window above. Do you notice the EncryptSensitiveWithUserKey option? That’s the default.

This means that, by default, SSIS uses the Data Protection API (DPAPI) to encrypt any sensitive data with the user key of the user who saves the package. Every Windows user has a user key, so this is pretty straightforward. Then, when the user goes to open the package again, the encrypted data is automatically decrypted without the user needing to do anything. Pretty slick, eh?

Yep. Pretty slick. Especially for SSIS developers who live in a world where they never work in teams and never have their packages run in an unattended batch job that uses a service account.

Unfortunately, I don’t live in that world, and neither do many of the SSIS developers I know.

Ok, let’s be fair. That sounded awfully critical, but it wasn’t intended to be. I generally don’t like to criticize unless I can suggest a better alternative, and in this context I don’t see a more reasonable default behavior. It just works, and it lets developers be productive with SSIS without needing to worry about manually configuring security settings.

The criticism that I have is that people just don’t seem to understand this, and that causes problems. If one developer didn’t understand it, then it’s probably his fault. But if dozens or hundreds of people have this same problem (and they do – just take a look at the SSIS forums on MSDN to see how often questions related to the ProtectionLevel property come up) then the communication about the feature hasn’t been what it could be.

So what is the problem, and how does it show up? Well, consider one of these situations:

I won’t go on. You probably see the trend already. With the default settings, initial development is easy, but downstream tasks are more difficult. Only the user who saves the package can edit and execute it without error. This is probably not what we want.

What about the other options? Let’s consider:

So what does that leave us? That leaves us with two options. The first is the one that I use and advocate: the DontSaveSensitive option.

This option, like the others we’ve seen so far, is pretty much self-describing. It protects the sensitive data by simply not saving it in the package file. What’s not to like? No password, no user keys, everyone can open the file without error. It’s a little slice of perfection in our imperfect world!

The difficulty, of course, comes in when you actually want to execute the package. The package can’t run if it doesn’t have a valid connection string to connect to that legacy database server from which it extracts data, now can it? So where does the sensitive data get stored, if not in the package? The answer is that we, the package developer, need to store that sensitive data in package configurations. This could be XML config files, it could be a SQL Server database, or the Windows Registry – there are many options. And each one of them can be secured in its own way, through database permissions, NTFS permissions or Registry ACLs.

The problem that some developers have with this is that it doesn’t let them get down to doing what they want to do the most, which is build their packages. And what do we say to those developers?

We don’t have much sympathy for those developers, because they’re missing the big picture. Yes, it can slow things down up front to have to add configurations to your packages, but this saves a ton of time later on. Configurations are a required feature of packages that will need to get deployed to multiple environments (and unless your packages will only ever be run by you on your machine, then this means your packages) and by adding them right at the beginning of package development you will have a much greater chance of having a successful deployment than if you wait until you start deploying to start thinking about deployment.

So this is what I recommend that SSIS developers do when building their packages:

Ahhh… life is good. Life is so much simpler when you have prescriptive guidance.

But wait… What about that last option. What about ServerStorage? Should we ever use that one?

ServerStorage can only be used when deploying packages into a SQL Server database[12]. If you deploy to SQL, then you can rely on the database to protect your sensitive data. But as you probably know, this doesn’t apply to package development. Visual Studio can only work with DTSX files on the file system – it cannot open packages from or save packages to SQL Server. This means that while ServerStorage is a viable option for once package development is complete, but not during development. During development you want to use DontSaveSensitive, even if you are planning to deploy to SQL.

So there you have it. I’ve spent five pages[13] saying “use the DontSaveSensitive package ProtectionLevel option when you develop SSIS packages.” But even though it took longer to read, hopefully you’ll have a better idea of why you should choose this option than if I’d just come out and told you…

[1] Just as a side note, re-read the subject line. Doesn’t it sound like the name of a children’s story? It was all that I could do to not write this post as an AeSISSop’s Fable or modern cautionary tale[2].

[2] I also started putting it to the tune of the Gilligan’s Island theme before i caught myself. I haven’t been feeling well lately, you see…

[3] Say it in your best Shrek voice and it may make sense. Especially in the fable context.

[4] Read the rest of the sentence and then have a good laugh with me, ok?

[5] Wait, then wipe the tears from your eyes, and then start reading again.

[6] And we all use source control, right?

[9] And can’t find your way down the hall to Bob’s white board.

[11] There will likely be other things that need to be set up in your template package too, but this is a good start.

[12] I personally prefer file system deployments and so do most of the SSIS professionals I know. Check out this post from Jamie Thompson where he discusses this topic, and make sure you also click on the link in the top of his post too.

[13] And if memory serves me, set a new record for the number of footnotes in a single blog post.