In my personal best practices for SSIS development, I claim that we need to treat SSIS packages like code. When I give presentations on this topic, I have a slide that elaborates and talks about how we must use source code control for our SSIS projects just like we do[1] for our “traditional” VB and C# projects. It’s one of those irrefutable best practices of software development; you wouldn’t drive your car without your seat belt, and you’d never even think of building software without source code control.

In fact, this is so obvious and so important, I had assumed that I must have blogged about it years ago. So I came here tonight to get the URL so I could reference it somewhere else.

And I couldn’t find it. So here’s the post I was expecting to find,[2] so that the next time I look I will find it here.

The points that I like to bring up in my presentations are how even though SSIS development is software development, there are inherent differences in the tools that can turn into “gotchas” if you’re not careful. In particular, walk through these basic steps just to make sure you’re following me:

Um… probably not. Or at least, not yet.

But let’s assume for the sake of argument that you followed this best practice and have been using source code control. And let’s further assume that since no one told you any different that you set up your source control plug-in in Visual Studio and left it with the default settings.

Let’s take a look at those default settings, shall we? 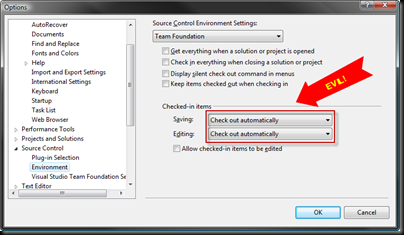 Why evil? Well, think back to the “not really editing a variable name” scenario from earlier. If this package were under source control, you just checked out that package without meaning to, and probably without realizing it. And that means that as soon as you walk out the door to go on that two-week vacation[3], you just became that guy. That’s right – the guy who gets blamed for things because he’s not there. Because the default source control settings in Visual Studio are to silently check out a file when the developer starts editing it. And while this may make sense for traditional code files, it definitely does not make sense for DTSX files.

And the worst part is, you really are to blame here, at least in part, because you did not resist, you did not fight back against the evil that consumed you and is now ravaging your team’s productivity. You’re kind of like Gollum.[4]

But do not despair – it is not too late to turn back from the path of evil! In fact, you really just need to change one drop-down, like so: 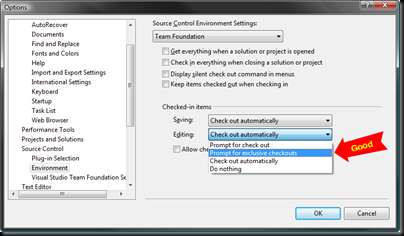 That’s right – just say “Prompt for exclusive checkouts” and the problem goes away[5]. Any time that you perform a step in the SSIS designer that would cause the package to get checked out (we walked through one with the variable name thing, but there are many more) you’ll be prompted to check out the file.

And that’s about it. As usual, I spent five pages to say what could have been done with one screen shot and ten words, but hopefully you’ll understand the context a little better this way.

So always use source code control, but also be certain that you have configured it correctly for SSIS.

[2] Yes, it’s late on a Saturday night, but hopefully you too will see that this is more than a little like time travel. Or is it just me?

[3] I did mention that you are going on vacation, right? Go on – you’ve earned it!

[4] Did I mention how much I loved you in those movies?

[5] Yes, this means that Sam and Frodo’s budding romance will probably never get a chance to bloom, but that is a price I’m willing to pay for you to enjoy your vacation.

Posted by Matthew Roche at 7:16 PM

OK, this is unrelated but not really. After seeing you speak in Las Vegas, I have been commenting my packages like a nut. Anyway, I usually have to type my comments into Notepad then paste them into the annotations box, why? I can't figure out how to place a Carriage Return into the box. Yes it makes me feel stupid. Can you expalin how to do this, I see the 2008 allows font styling...

Hey cool - it's good to know that I've made the world a better place, at least a little. ;-)

Interesting, when checking in, and comparing versions, both these properties of the SSIS package had been changed:

The build incremented, and a new guid generated. Maybe there's something to that, I wouldn't expect these to increment until at least the next execution of the package, not a designer change.

Of course, I already had both source control options set to 'Prompt', so I had to revert to see this behaviour!