From my experience, the vast majority of SSIS developers tend to go with option #1. The Script Task and Script Component are relatively simple to implement, and you can take advantage of the .NET Framework base classes from your VB.NET code (or C# code starting with SQL Server 2008) without needing to worry about building and deploying a separate DLL to accompany your packages. Since the code is contained within the package itself, all you need to deploy is the package.

But therein lies the biggest drawback of using the Script Task and Script Component as well: the code is contained within the package itself. This means that if you have the same logic that needs to exist in multiple packages, then you need to copy it into each of them, which can quickly make for a maintenance nightmare if that shared logic needs to be updated.

And this is where custom components come in. Because they are defined outside the package their logic can be defined (and updated) in a single shared location and used in as many packages as necessary. Even though building a custom SSIS component is "real .NET development" it is relatively straightforward if you have .NET development experience. The SSIS object model defines a set of base classes and interfaces, and there samples included with SQL Server so it's easy to cheat during development.

But deployment and testing is often a different story. There are a few minor "gotchas" waiting in store for SSIS component developers:

Now if you're a developer who has experience building other types of .NET applications but have not build components to plug into other products (like BizTalk, Commerce Server - you name it) this may seem daunting. But fortunately this isn't the case - it's really as simple as pie.

First - the GAC. There is a command line utility called GACUTIL.EXE that is included with the Visual Studio SDK and the Windows SDK. On a computer with a standard installation of these two tools, you will find it in these two folders:

Second - the "special folder." The actual folder will vary based on the type of component you're building, but they're all (on a computer with a standard install of SQL Server) subfolders of C:\Program Files\Microsoft SQL Server\90\DTS:

As you can see, there's a folder for each type of component that you can develop.

Now that we know where the assembly needs to go, how do we get it there without needing to manually copy it each time you build the project? The answer lies in the project properties, on the Build Events tab: 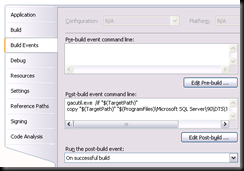 Please note that this example applies to a custom task - if you're building a different type of component, you'll need to put in a different folder path. Also please note that the example above does not include the fully qualified path for GACUTIL.EXE. This is because on my development machines I have added the C:\Program Files\Microsoft Visual Studio 8\SDK\v2.0\Bin folder to the PATH environment variable so I don't need to type in the full path for the many helpful utilities in this folder. If you have not added this folder to your PATH, you will need to fully qualify this file.\

With those disclaimers out of the way, note what this Post-build event does: every time the project is successfully compiled, the project output (the custom task assembly in this case) will automatically be added to the GAC and be copied into the "special folder" where the SSIS designers in Visual Studio need it to be. We're good, right?

Well, there is still the question of testing and debugging. I'm sure that most developers always write perfect code the first time, but I always seem to need to iterate a few times to get my code just right. And in order to see the runtime behavior of an SSIS component is to add it to a package, and to run that package. Well, that's straightforward enough, but how to do that and still be able to set breakpoints in the component code so we can find those pesky bugs? Fortunately, the answer here is just as simple as before, and the place you enable debugging it in the project properties again - this time on the Debug tab:

There are two things you need to do here:

Then, it's as simple as debugging any .NET code: set breakpoints where you want to pause execution, and hit F5. Visual Studio will launch DTEXEC.EXE and attach to the new DTEXEC process. DTEXEC will load the package, which will in turn load and call into your custom component. Your breakpoints will be hit and you'll be able to step through your code to your heart's content.

Update -  01 June 2008: If you're developing your custom component on a 64-bit Windows computer, remember that the folder to which you need to copy your assembly is in the C:\Program Files (x86)\Microsoft SQL Server\90\DTS\ folder, because Visual Studio is a 32-bit application.

Posted by Matthew Roche at 4:28 PM

There is another version GACUTIL that I fond in 64 bit machine at C:\Program Files\Microsoft.NET\SDK\v2.0 64 bit\bin. Should we use this 64 bit version of GACUTIL.EXE for 64 bit SQL Server 2005 and Windows Server?

I created a custom SSIS component and when I tried to use multiple instances of my component in a single package. It behaves wierdly. Both the tasks marked finished same time though any one of the tasks is still working.
Any clue?

@Shripad - I've never seen this behavior, so I don't want to guess at a possible reason. Your best bet is probably to post your problem on the MSDN SSIS forums here: http://social.msdn.microsoft.com/Forums/en-US/sqlintegrationservices/threads.