I had the most incredible day yesterday. It was the first day of the big TechEd Developers 2008 conference in Orlando, but that wasn't the thing that had me the most excited. I was (and still am) excited because of my lunch date. So what was I so excited about?

My lunch date was Bill Gates.

No, I'm not kidding. Yes, it was really that cool.

So how did this come about? As you probably know, Microsoft has a wide variety of communities with which they interact, such as the MCT and MVP programs. Members of these programs, in one way or another, work with users of Microsoft software around the world, and Microsoft values and appreciates the work that members of these communities perform. Well, to make a long story short, I was nominated as a community "influencer' by some kind folks at Microsoft, and in the end was selected as part of a small group (around 15 people) to meet for lunch with Bill Gates and S. Somasegar (who owns the Developer Division at Microsoft) for an "Influencer Roundtable Luncheon." 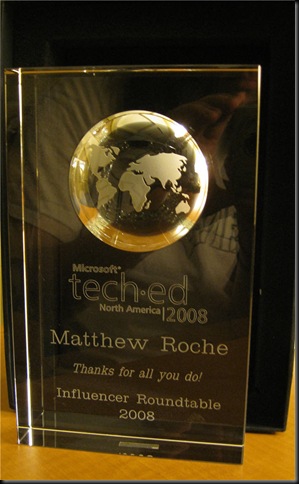 The food was ok (I was hoping that there would be lots of foie gras and black truffles, but the chicken and veggies weren't too disappointing) but the conversation was great. Mr. Gates was totally relaxed and casual, and pretty funny too. For the most part the conversation revolved around ways that people (and companies) can make a difference in the world, which should be no surprise based on the makeup of the group.

And there were some very impressive people on the invitee list. One was Charles Hughes, a past president of the British Computer Society. He is working on a global organization to bring standards for professionalism and ethics to the IT world - something that is obviously very much needed. I had a chance to talk with him earlier in the morning, and he made a very strong impression. All of the things that he is doing are things that are dear to my heard, things that I do on a personal level and try to do locally, but he is working on a global scope, which is somewhat awe-inspiring. I don't know quite how I fit in with this august company, but I am delighted and honored to have been involved.

[1] Can you see the Manowar-shirt reflected in the photo above?

Posted by Matthew Roche at 1:44 PM

That is simply awesome! Congratulations!

Matthew, great to meet you too and thanks for your support for the IFIP International Professional Practice Parternership, IP3.

Congratulations on your award. I'm on the IP3 task force with Charles, and it's so rewading to hear folk like you say it's a great idea!

aweome experience for you! Congrats.